Back from NY and my brother's wedding. Now, there is a new reason for me not to get married - to avoid all the craziness that comes with weddings. Anyway, my big news - I HAVE A NEW FAMILY MEMBER!

:-) Let me introduce my kitty, Lucy Lu. Three weeks ago I happened to walk into a PetsMart's adoption room, and... she picked me, and I had to take her home.

I did a few shots of her (behind the cut), on the bed that you kindly helped me to pick. I should have made it up better for the pictures (both, the bed and the room), but didn’t realize I’d be shooting the cat. So, here’s the cat, and the bed, and I love them both.

PS. Just found out that a piece of mine was nominated for round 2# of the

Here's a little prezzy for your, dearest. Hope you like. *hugs*

I am back from my parent's, where I had to reside yesterday in order to watch EUROVISION. Finland won, which was well deserved. The guys did stand out within the typical bunch of ABBA wanna bees, although I didn't like the song. The second place for the Russian guy was expected too - I thought the ballerinas were ridiculous, but the guy was hot, and the song was OK for a pop (and yeh, it is stuck in my head forever... never-never-let-you-go).  I LOVE songs with some ethnic motives, and although Horvatia wasn't my favorite one among them (I much preferred Armenia or Macedonia), I agreed on the third place for them.  Was disappointed with France's rating - it was my favorite song on the show this year, and it certainly deserved better grades.  The rest, as I said, was a all together blending mix of ABBA (and not in a good way)

I am back to fanfiction reading. Fortunately, or unfortunately, the period I’ve missed was filled with Angel-centric stories. And since I am firstly and mostly Spike’s fan, I won’t have too much catching up to do. So, I’ve been recommended Spander story… Dirty Dancing Spander Style, by

I thought I wouldn't like the story, because what can you really add to Dirty Dancing.  I was so delightfully wrong - the story is hilarious, clever, and extremely well written.  I was laughing so hard, my stomach started hurting after the second chapter (not to mention my parents thought I was going nuts).  Highly recommend the story, which also inspired me to do a little movie poster.  Overall I believe that if our girls did the sequel to the movie, it would be much better than that "Havana NIghts" disaster.  Sorry, correcting myself, anything would be better than the Havana Nights.  If our girls did the sequel, it would be plain super.

P.S. OK, it wasn't me. Some cunt (who wasn't me, obviously) disactivated lj-cuts on my journal.

1) Couple of my manips been nominated for

spander_awards!  Squeeeeeeeee!  Thank you to however nominated me.

2) I purchased a condo just a couple of days ago... With all the ongoing complications that could possibly occur in the process...  But it is mine now!  :-)   Once the work is finished and I move, I'll be the old self again.  Promise.

Sale ends tomorrow, and I want to buy a bed and a bed crown.

The bed I want to buy is here:  The bed

Here's the problem - which color of the bed crown should I pick?   The brown one should match with the bed and floor, but the white one will go with the molding and should have less dramatic look.  The walls in the room are light lavender, and the overall style is simple Romantic, with very few elements other then the bed (which I will hopefully get).  Gosh, I really don't know which one to pick, and the sale ends tomorrow, and I really want the bed and the crown as a set, and the shipping cost is too high to get both colors and then send one back.  Shit.  Please?  If I have any friends left, please give me an advice!  It will be muchly appreciated.  Muchly!  :-)

ETA: I've got the bed and the wood-color crown yesterday. *hugs my friends tight* Thank you so much for making me pick the right thingy!

No comments, no birthday thingies and no manips from me for a while.  Sorry to everyone I've promised to manips, but I've got a huge graphic project at work  (which I shouldn't have gotten in the first place, 'cause mkhe...mkhe... IT department), and now the look of Photoshop, Illustrator and Quark makes me sick.   Frankly, I no longer feel obligated to make (some) lj people feel good, as I believe many of them don't care about anything but their own asses anyway.  Sounds harsh?  May be, but I've passed the point of altruistic appreciation, especially considering I am more likely to receive crap in return anyway.


I have to remember to do what I've planned for

spring_spangel in March.  BY THE WAY, EVERYONE NEEDS TO SIGN UP WHO DIDN'T SIGN UP TO IT YET.   That's me pimping, by the way.

ETA: As I had just realized, I am no longer your "friend". *shrug*
Still, happy birthday. Sorry you aren't gonna see it. 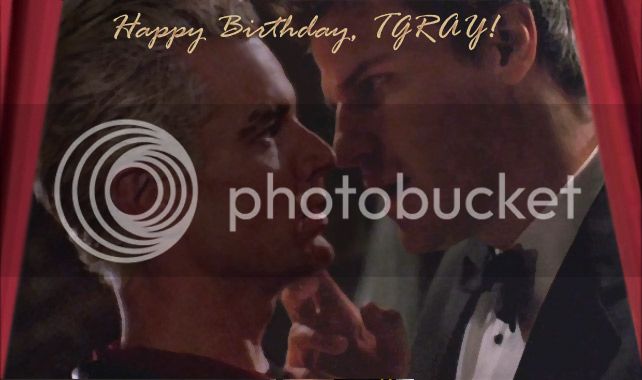 Oh, there was so much going on here, I am loosing track of what I've missed.  Commenting on all of them is probably not an option, but I hope to go through all my favorite stories, at least.

Thank you for checking on me, I wasn't able to reply until now either.  Doing it!

Here's the lesson: if you already have a boo-boo, then don't eat properly for nearly two weeks, and then eat and drink a lot all in one day, then there is a high probability you will end up in the emergency room.  Here's one good thing about it though - you can instantly lose a few pounds.  IoI  The rest sucks.

There are some very cool prezzies that I've got.  Will post about some of them, hopefully tomorrow. :-)  *hugs to all my friends, if I still have any*.

Sorry I've missed it. Hope you forgive me. *blushes*
Collapse